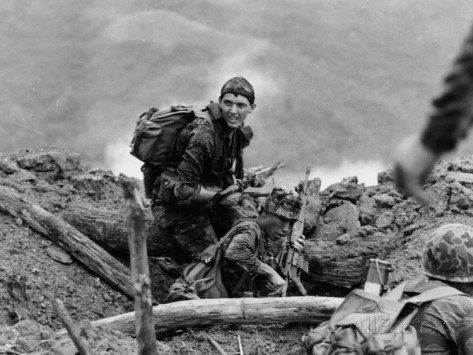 Shot, Stalked, & Stranded: Just Another Day for a Green Beret

Seventeen Americans and 410 South Vietnamese troops were on a hilltop when their base came under attack at 4 AM.  Special Forces Sergeant First Class Adkins was there.

Adkins was blown from his position with shrapnel burning in his back. Shaking it off, he fought back with his own mortar fire. At one point he got word that two of his men had been hit, so he raced through thick enemy fire to drag them to safety.

When things calmed down enough, choppers came to evac the wounded. Adkins helped load injured men. Suddenly gunfire erupted. Adkins turned to see a truck bearing down on them, with a dozen traitorous South Vietnamese firing on them.

Bad move, going over to the enemy. Adkins opened fire and the attack was stopped within minutes.

The battle continued. Twice Adkins raced outside the base walls: once to pull a wounded man from a trench, and once to retrieve ammunition and food that was airdropped into the middle of a minefield.

The following day, an assault was launched by North Vietnamese troops. Adkins was again blown from his post and wounded. He just brushed it off and fired back with mortar, bazooka and his M-16.

Adkins was hit by a bullet and shrapnel from a grenade, but kept fighting. He even managed to take out some of the enemy by tossing their own grenade back at them. It was close-quarters combat as their position was overrun.

With 18 bullet and shrapnel wounds, Adkins and seven other Green Berets volunteered to hold off the enemy while most of the survivors were lifted out by helicopters.

After the evac, Adkins was left with seven other Green Berets and a couple of dozen South Vietnamese soldiers. Wounded, with no sleep for two days, he began to elude the enemy in the dense jungle.

For 48 hours they dodged their pursuers. They had some unusual assistance: they were stalked by a tiger following the blood scent from their wounds. But the tiger helped make the enemy cautious. They finally got to a position to make contact and be rescued.

Adkins completed three tours in Vietnam, and was awarded the Medal of Honor. That’s one tough soldier we shall never forget.