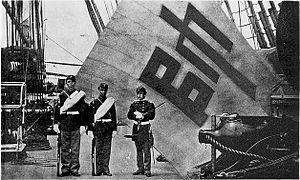 The Korean War took place between 1950 and 1953. But it may surprise you to know almost 80 years before that American Sailors and Marines fought in Korea.  It has been virtually forgotten, but it was the very first U.S. military action within the country. But no history should be forgotten.

The ruling Joseon dynasty, not fond of communicating with the outside world, was in control of Korea at the time, in 1871.

That same year some Christian missionaries met a very unpleasant end, and the French Navy came to punish the Koreans. However, the French ships were repelled by Korean cannons.

Five years later the American Navy arrived to Korea to establish trade and see what became the merchant ship.

Americans made contact with local citizens, telling them what they planned. Several U.S. ships then sailed into the Han River, but came under fire from a Korean fortress. American vessels returned fire, silencing the fort’s guns.

The American fleet withdrew, but demanded an apology (which was not forthcoming). Ten days later, five American vessels returned and got into it with another fort. While artillery flew back and forth, American Sailors and Marines landed and climbed the walls.

Two Marines captured the Korean commander’s flag. Another Marine, facing heavy fire, raised the Stars and Stripes on the fort. You can see Marines above with the captured flag.

As a result of this military action, fifteen US servicemen received medal of honor.  This was the first instance of US awards for military action during foreign conflicts.