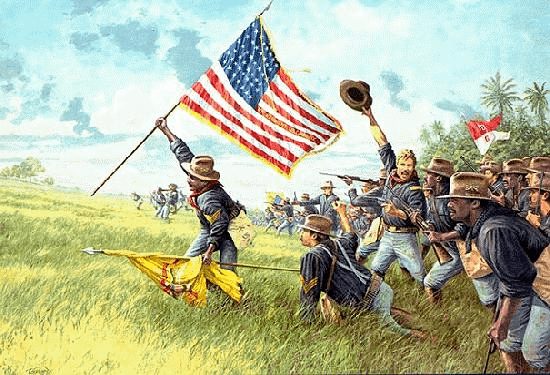 “When that pack of demons swept forward…”

Sergeant Major Edward Baker was born in a frontier wagon in 1865, while his parents were on the Oregon Trail. At age 17, he joined one of the toughest, battle-hardened units in the U.S. Army: the 10th Cavalry.

The men of the 10th were known as Buffalo Soldiers, African-Americans up through the NCO ranks. Baker was in some ferocious shootouts in the Old West, but this story begins in Cuba.

What? Cuba? That’s right. America was in the middle of a tussle with Spain. One morning Sergeant Major Baker was at the edge of a jungle, staring at a fortified Spanish position. To his right was the 1st Volunteer Cavalry (the 1st commanded by Lt. Colonel Teddy Roosevelt, the future president. But the Buffalo Soldiers were the professional, seasoned veterans.

Baker was going to have to lead his men out of the jungle, over open ground, across a river, up a hill, through barbed wire and enemy trenches. And then take the fortress at the top of the hill.

Soon Baker was racing, artillery explosions and bullets zinging all around him. He kept his men going and got across the river.

Suddenly, a scream from behind him. One of his men was in the middle of the river, badly hit. Baker went back in, pulled his man to the safety of cover. (Teddy Roosevelt would later write about the bravery of the 10th that day.)

Then the 10th stormed up the hill. All hell broke loose, but nothing was going to stop the Americans that day. Corporal John Conn of the 24th Infantry later wrote:

“When that pack of demons swept forward, the Spaniards stood as long as mortals could stand, then quit their trenches and retreated.”

Soon the fighting was hand-to-hand. Then the Spanish lines broke, the retreating men followed by the 10th Cavalry.

The Battle of San Juan Hill in 1898 is now legendary. Baker and three other men of the 10th would be awarded the Medal of Honor for actions that day. And Baker was promoted to Lieutenant, becoming one of the first black officers of the United States Army.