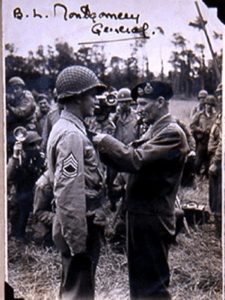 Omaha Beach was a bloodbath of WWII. Surrounded by steep cliffs, it was heavily defended. Aerial bombardment did little damage to the defensive fortifications. Rough surf was hard on the landing craft, and only two of 29 tanks managed to reach shore.

John Spalding was in command of a 32-man platoon at the spearhead. He was a green lieutenant, but Spalding had a tough sergeant, Philip Streczyk, of the U.S. 1st Infantry Division,  battle-hardened in North Africa and Italy (that’s him above, Field Marshal Montgomery pinning on a medal).

Private Stanley Dzierga said this of the sergeant: “He was fearless.… it just seems he was immune to the fire.”

The platoon took a beating, but made its way to the foot of the bluffs. Streczyk charted a path to ascend a ravine. Later a general wrote this:

“To the best of my knowledge, he was the first one on the beach and it was the path that he took that I picked up. The rest of our battalion followed, and then later on I think almost the whole corps went up that same path.”

As the platoon advanced they came under fire. Spalding and a few others rushed the machine gun nest, taking the enemy gunner prisoner.

The prisoner turned out to be from Poland, pressed into service. Streczyk spoke Polish, and interrogated him. There were 16 more men behind him, and he claimed they had voted that morning not to fight, but were forced to stay put and resist.

Streczyk was not convinced. He smacked the man in the head, saying “So why are you shooting at us now?”

The platoon kept advancing, taking out enemy positions and gathering 17 prisoners. Without their efforts, many more US men would have died on the beach. Spalding, Streczyk and five other men in the platoon received the Distinguished Service Cross.